Money and markets are powerful tools in developing our world, most would agree. However,  the negative effects, some might say unintended results of their application are painfully apparent. These include environmental degradation, unequal distribution and crowded, unhealthy cities. To achieve a sustainable future, and the Sustainable Development Goals in particular, all options for changing the economic system should be on the table.   Should we abandon industrial capitalism and our present monetary system altogether? Should we introduce a form of sustainable five-year planning regime?

Could we pay people to do the right thing?

At the other end of the spectrum could we consider harnessing the power of money and markets to achieve our goals? Is it not possible to “pay people to do the right thing” to solve global issues quickly and effectively?  In other words, appropriately applied, the power of markets and the usefulness of money as a tool can bring humanity towards a peaceful, sustainable and prosperous society.

Calling for a systems upgrade

The model requires the economic system to be completely aligned with, and serve, human values and needs. Fortunately, advances in engineering using digital systems to control performance, and the spreading digital economy, allow this next leap to happen. Breakthrough developments in market-based Instruments that work as actuators in complex systems, relying on information and feedbacks to citizens, like Climate Dividends, provide the platform for completely new approaches to governance through financial steering.

To understand the potential for the transformation of the financial system it is necessary to understand recent advances in engineering of system control. With the advent of digital technology, engineering has developed a way of applying a control layer to a device to ensure that it behaves according to intentions. Examples include the anti-locking devices fitted to brakes, cruise controls and the automatic landing systems in aircrafts. This approach is called control engineering.

A well-developed application of  control engineering is to vehicle engines. The digital control layer consists of sensors, actuators and controls. The control comes from the driver of the vehicle as a signal of intended performance, through this intermediary control system. This is where the term “fly by wire” comes from as the driver of the vehicle is not in direct mechanical control of the engine, but sends the commands to the control layer which in turn interprets the signals depending on a range of factors including the information coming from the sensors.

The benefit of control engineering approach is that mechanical controls can be simplified yet the control more precise and at the same time the workings of the device can be highly sophisticated. Once dirty technology, like the diesel engine, can be run cleanly as optimum combustion (and therefore clean burning) can be obtained by micro-controlling each piston stroke and the combustion cycle.

A stabilizing feedback system for the economy

In a financial system, subsidies and surcharges on existing levies could act as actuators.

The diagram below shows a simplified view of the financial system’s four main actors: citizens, firms (including banks), national governments and local authorities. 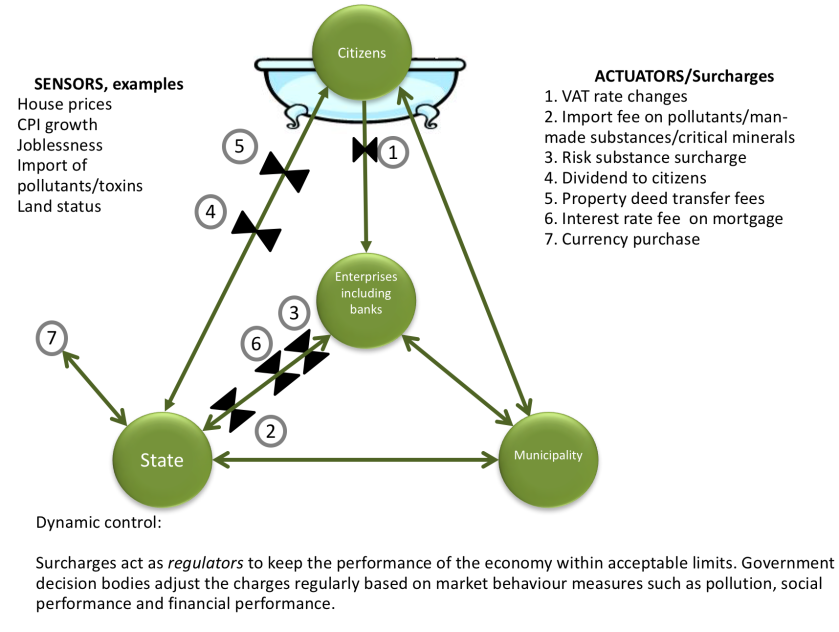 Important to grasp from this diagram is the connection between private and public ownership. Only citizens own privately, this includes ownership in firms and as tax-payers. Indeed, all national and local governing bodies represent citizens too. All firms are owned by citizens, and all governments represent citizens. It follows then that the rules governing the system as a whole should be put in place to ultimately benefit all citizens.

It is in this model that points can be identified where adjusting rates and incentives could radically change purchasing and production behavior.

Most tax and fee systems are rather complex. Adding more would only add to the complexity. The model proposes levying surcharges on already existing instruments in order to simplify administration. These surcharges (which can be negative) can be levied on, for example, VAT, import fees, interest rates, employers’ tax and property deed transfers. For example, putting a surcharge on the import of fossil fuels would make fossil fuels and products dependent on fossil fuels more expensive and encourage the purchase of alternatives. If at the same time revenues from the fees levied were paid back to citizens, purchasing power – and thereby overall demand in the economy – would be retained, in itself another form of actuator.

The diagram below shows the surcharge opportunities in more detail

(A ) Products with key substances likely to pollute and extracted outside the national borders can be subjected to an surcharge on import duties. (B) Emissions from Property owners, or (C) extraction could also incur charges. The point where products reach end-customers via export (D) or sales in the country (E) provides a surcharge point (on VAT for example) as well as all waste services bought by consumers (F) where surcharges for unsorted waste could apply. Should material end up with waste management organisations, a charge on emissions cold be levied (G). Finally, sales of material (H) from property owners (sales of toxins for example) offer clear surcharge points.

How it works step by step

Step by step it could work like this for pollutants: a fee is levied on substances that pollute as they enter the economy. The fee is later adjusted depending on how the market responds in reducing pollution. If targets are not met, the fee is raised. If they are above target, the fee is adjusted downwards

Essential to stabilizing mechanisms is feedback. A good proportion of the fees levied should be channeled directly back to taxpayers. The increased costs of production inputs through extra fees are merely passed on to consumers. This reduces the money in circulation and is generally negative for an economy so feeding back the money into circulation is essential for a healthy economy.

Another feedback is from sales figures and pollution figures, showing how the market is performing in general.

The slower the market responds to pollution surcharges, the higher the surcharge is raised, and the more people will have in their pockets to purchase non-polluting alternatives.

In this way, the power of the market is harnessed by creating true demand for non-polluting products and services.

Pollution comes from the release of extracted substances into the air or water. These substances are a) needed in the economy and b) finite. It makes sense to ensure that the price of these substances is sufficiently high to encourage recycling.

Stimulating consumption in the non-polluting economy

Curbing pollution means that consumption can be stimulated so the poorest get their needs met.

Making sure everyone has enough to live: the safety net

Various instruments can be applied to ensure the poorest have enough to live on. These include reducing VAT to stimulate employment as well as altering tax levels and offering benefits.

Asset price increases can increase far beyond replacement costs. This creates dangerous bubbles and can inflate debt levels beyond what is sustainable. This may be acceptable for works of art, but for basic needs like housing instruments can be applied to maintain real estate close to replacement prices.

We have many options in front of us and we must start to explore them now. Modern system tools with advanced modelling capabilities offer us ways to get started without risk. And small-scale experiments, like those with basic income, can reveal valuable insights for us to go forward.

The stakes are higher than ever. The economic system has crashed several times before bringing with it untold suffering. This time, on a crowded, polluted planet it could be many times worse. Before abandoning the monetary system, is it not worth looking at an upgrade instead?