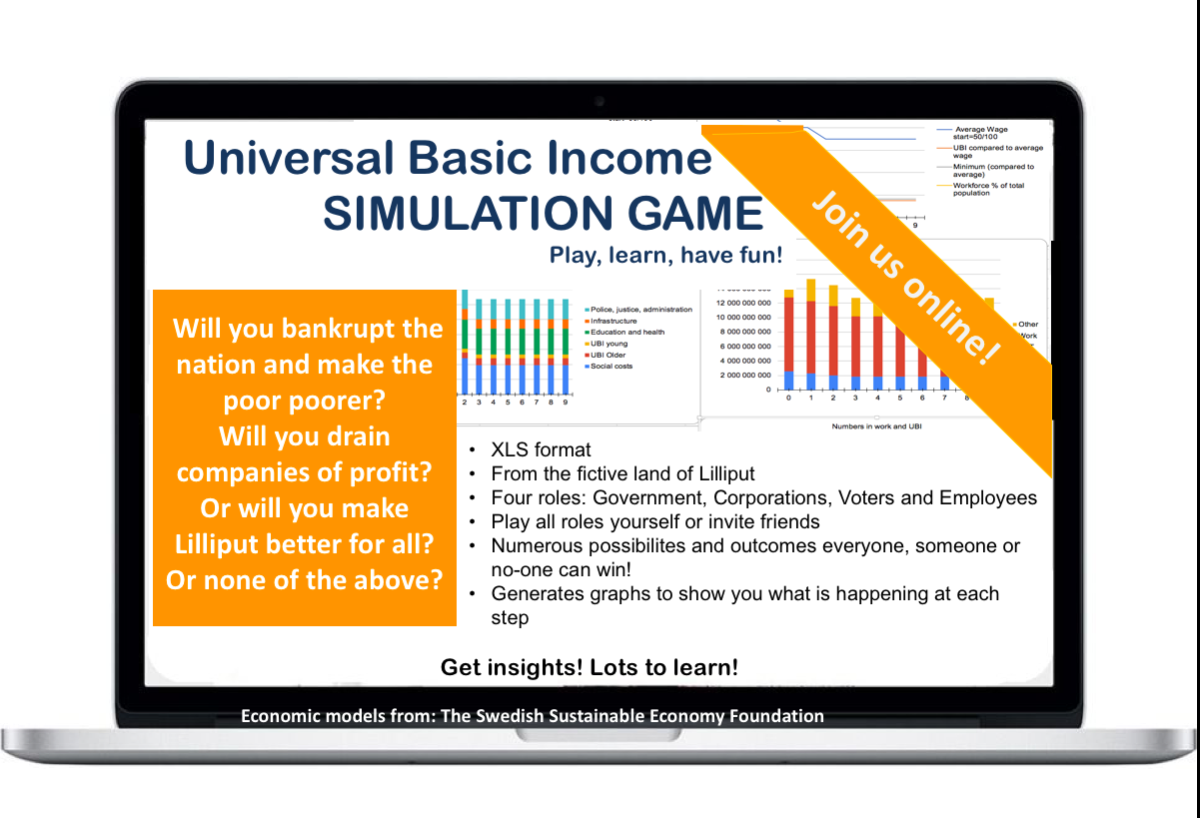 UBI means Universal Basic Income and guarantees people who are not in work a basic income level. About UBI people have a lot of different opinions – some say it frees up people and their entrepreneur spirit – others say it makes people lazy. How are we going to pay for it? is another objection.

We designed and built this downloadable single player/small group version so you could try out ideas around UBI for yourself.

END_OF_DOCUMENT_TOKEN_TO_BE_REPLACED

Starting in August, 2019, we are offering a one-day deep immersion experience of Universal Basic Income (UBI). The day revolves around a business-game like simulation featuring an imaginary country, Lilliput, that has decided by referendum to introduce UBI.

END_OF_DOCUMENT_TOKEN_TO_BE_REPLACED

In this article we are going to demonstrate how the UBI works “under the hood” by looking at the underlying game logic.

The game makes some vast simplifications of how a national economy works – it is after all designed to be a learning experience rather than a mirror of how the world actually works.

END_OF_DOCUMENT_TOKEN_TO_BE_REPLACED

This article shares some of the news from creating the alpha version of the UBI game.

END_OF_DOCUMENT_TOKEN_TO_BE_REPLACED

Together with the Swedish Sustainable Economy Foundation I am developing a Universal basic Income “Business Game“. The idea is to take a simplified, fictive country and play around with various aspects of UBI to learn by doing.

The above run was a force run to see how raising taxes and lowering numbers in work looks in the system. As you see the state gets less to spend on services as income declines. Maybe not so interesting. The next run looks at raising UBI from under minimum standard and just raising VAT.

The second run added spending power of UBI takers to the dashboard. If you raise VAT you lower spending power. Interestingly – in the simplified model at least – you get MORE state income and the UBI takers do not get lowered VAT. This gives us a hint that it might be possible to raise UBI and Universal Basic Services, although the UBI eats away at the money available for social costs.

Modelling like this raises many detailed questions and it is a difficult task to make the game engine simple enough to handle in a game situation ( so that you learn basic principles) and complex enough to give a feeling of “real life” (so it feels authentic enough).

Let me know in the comments if there is any logic I am missing or any metric you want to see on the dashboard.

Click here for more articles on the UBI simulation