Reposted from the site for teachers maths4sustainability. This particular problem might be of interest to regular readers – it presents the idea of energy slaves which is one of the biggest challenges facing circular economy.

Suppose we imagine all the energy we use that is not produced by our own muscles as energy slaves. This is what Buckmaster Fuller did. To understand his thinking better, visit this entertaining and informative comic strip by Stewart MacMillan.  And then try the questions. 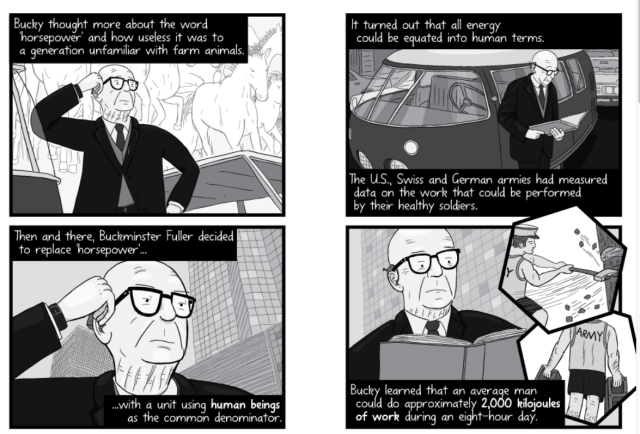 GIVEN That the total fossil fuel energy import to Sweden is 159 TWh per year. Of that, about 80 tWh per year are used for transport inside the country.

GIVEN that the population of Sweden is 10.04 million.

How many energy slaves does each Swedish Resident command over per year?

How many of these are fossil-fuel slaves?

If Swedes are to live fossil-free, how many energy slaves must they release. What percentage is that of the total? What would this mean in practice? For conversions Terra- Mega- Kilo etc see the conversion page