Are your circle economy diagrams confusing your audience? This article aims to help you communicate clearly. As a staunch aficionado of reaching a resilient economy through sustainability I am all for circle economy thinking- if it ensures people get food on the table and a roof over their heads. Unclear delivery will not help our cause. We talk of circle economy from two angles: economy as a form of housekeeping and economy in terms of monetary flows. These are not always the same thing. The final section suggests a solution.

Let’s start with the theory

The aim of the circular economy is to retain and recycle technical nutrients in the economy, to cycle biological nutrients from the economy to the biosphere and back, and to utilize money to facilitate transactions and trade.

As shown above, biological nutrients come from the eco-system and comprise plant material and animal material like that in leaves, leather, twigs etc. These are part of essential services – like food, baskets, shoes etc. The material eventually returns to the earth, to be incorporated into new organisms and cycle around again.

Most are familiar with the idea of biological nutrients. Technical nutrients on the other hand may be an unfamiliar concept. At one level they could be characterized as “parts”. A car gets scrapped for some reason, but parts can be refurbished and sold to be put into working cars, for example when the cars are repaired. Several eco-marked insurance companies are beginning to stipulate that second-hand parts should be used in insurance repairs where possible. But of course, parts are in themselves made of other nutrients like components down to the atom level. Technical nutrients include metals and minerals like silica that at their lowest level of are mined, refined, worked and combined to end up in products like knives, electronics etc. In the circular economy technical nutrients recycle in all forms from parts to materials.

To make the diagram clearer we can add where they come from: the green is the eco system and the brown represents the geological layer of the Earth.

But the biological products return to the earth and the eco-system. No so for the technical nutrients. There is no point in mining products and the putting them back. To clarify the difference we need to add new parts to the diagrams.

In this new version the blue circle has a “leg” to represent the extraction of minerals etc. from the geological layer. On the left, the green circle is moved to be in contact with the strip representing the eco-system.

But we are still not done. 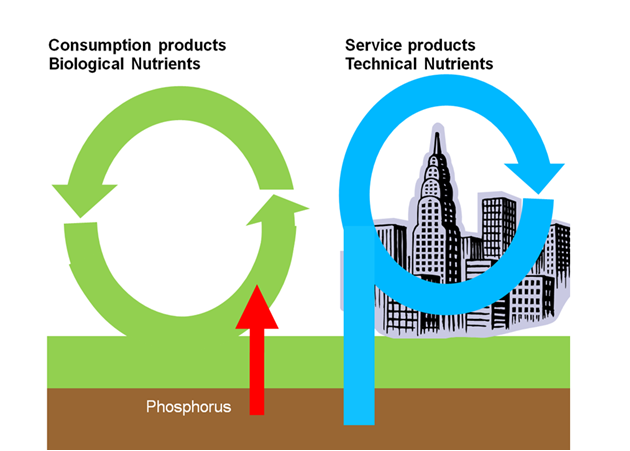 In this final diagram we show how phosphorus is mined and brought from the geological layer into the biological nutrient cycle. Now we are closer to reality. We can let the red phosphorus arrow represent a restricted number of mined or otherwise extracted technical nutrients enter the biological component cycle.

Nitrogen (N) represents a third category – where intervention from the technical infrastructure takes inert nitrogen from the air (in the process of the  internal combustion engine) and turns it into nitrogen and oxygen compounds that end up in the soil.

We should emphasis the importance of seeing the atmosphere (and the aquasphere for that matter) as part of the eco-system.  The diagram above illustrates how the technical infrastructure  releases what was once in origin a  technical nutrient (carbon from fossil sources) into the biological nutrient cycle. Interestingly, the carbon in the atmosphere affects the climate system – the physical, meteorological system of the earth-, is often not included when talking about eco-systems.

It makes sense to include the atmosphere as well: changes in climate affect both the technical nutrient cycles as well as the biological.

Pollution and waste –stream congestion are poor housekeeping of resources.

The diagram above shows how biological nutrients cycle around from the economic system back to the eco-system and out again. Pollution occurs when nutrients accumulate in the wrong places. Biological nutrients can accumulate in a way that the eco-system cannot incorporate. Example of this include accumulation of phosphorus in watercourses resulting in eutrophication. Note that the red arrow that represent phosphorus – which enters industrialized economic systems from mineral sources – is a rather special case. At first sight it might seem that the phosphorus is something that can circulate indefinitely. In practice, however, large quantities wash into the oceans where they are, or have been up to now, irretrievable for practical purposes. This means the practice of mining must continue.

Were we to include the three main pollution challenges in the circle economy diagrams, that is to translate the planetary boundaries challenge into a circle economy challenge, we could use the table below.

Illustrating these nutrients implicated in planetary boundary overshoot in a circular economy diagram could be attempted using the device below. 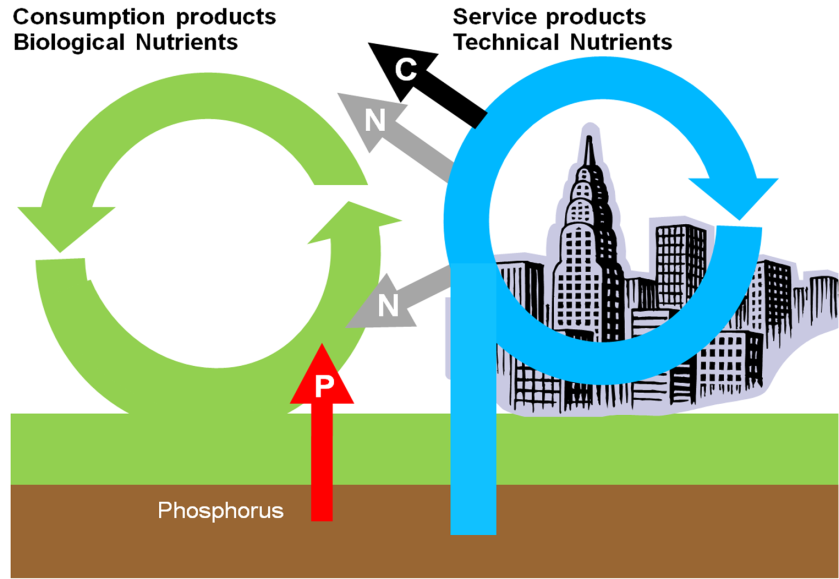 Carbon enters the air as carbon dioxide from combustion including fossil fuel derived from the geological layer.

Economic incentives should be put in place to ensure industrialized economies introduce the circular economy. The Swedish Sustainable Economy Foundation, (TSSEF.se) for example, has proposed flexible pollutant fees. These work by placing fee levying mechanisms at strategic points where both technical and biological nutrients that cause pollution enter the economy, and raising them sufficiently at sufficiently frequent intervals until the market gets stimulated to introduce non-emitting alternative approaches. In TSSEF’s model, fees collected from the levy are paid back to citizens via, for example, tax refunds.

I am well aware that fossil carbon is from eco-system origin from the beginning. It does not make sense to me to suggest that it can be put into the atmosphere in huge amounts fast by burning because of that.